What You Need To Know

Located just across from the visitor complex’s Rocket Garden, Gateway’s futuristic building features color-shifting panels that, depending on which side you’re on, will appear purple or green.

Flanked on either side of the building is the JPL (Jet Propulsion Laboratory) Line of Sight, fully-functional rotating signs that automatically turn toward different celestial orbits.

Once inside the Gateway entryway, a video welcomes visitors to the attraction. Around the corner, projection mapping covers the walls and floors with images from space.

On the main level are several interactive exhibits, including some with flight-flown artifacts like the Orion capsule that flew the Exploration Flight Test-1 in 2014.

Visitors can climb inside a full-scale mock-up of a Boeing Starliner capsule, or even venture into a mock-up of Lockheed Martin’s deep space habitat.

One of the exhibits features a spacesuit from Boeing, and while visitors can’t touch the suit, they can try on the space gloves virtually and use them to try to pick up objects.

“We try to do things differently,” Kennedy Space Center Visitor Complex chief operating officer Therrin Protze said. “They can interact with the transparent OLED TVs that actually have video on it. They can touch it, they see projection mapping on the actual vehicles itself, so they actually see the vehicles somewhat come alive.

Other artifacts on display at Gateway include the SpaceX Falcon 9 booster that launched Elon Musk’s Tesla into space. The booster is suspended from the ceiling of the attraction.

On the second floor, visitors can learn about satellites and probes via a 30-foot tall interactive wall. 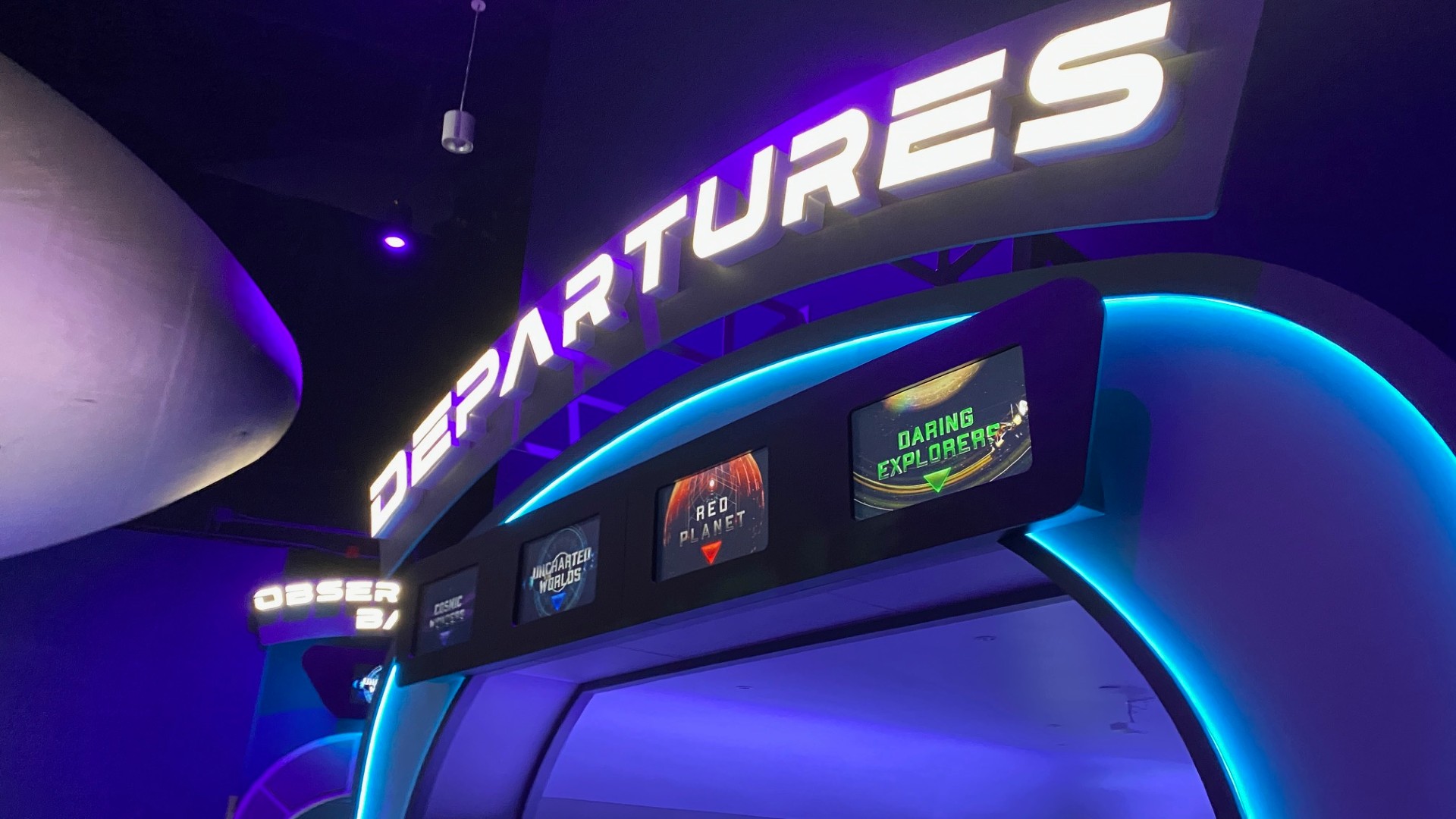 But the highlight of the attraction is Gateway’s Spaceport KSC, a two-story motion theater that simulates traveling to space.

“This is kind of like a two-part attraction.,” Protze said. “You get to see Gateway and then you come to Spaceport KSC just like MCO (Orlando International Airport) and you walk through a portal, walk through a jetway.

“You’ll look outside — you’ll look at what we think a spaceport might look like in the future.”

Visitors will enter one of the simulators and be buckled into a seat before being suspended over a dome theater to go on their journey. The space visuals are accompanied by narration from NASA workers as well as special effects like moving seats and wind.

A motionless version of the attraction is available for those worried about motion sickness or those who are unable to transfer into the seats in the motion theater.